Quick Tip: exporting a SVG with a pattern that works in IE/Edge from Illustrator CC 2015

TLDNR: for the moment, if you need to export an SVG pattern with Illustrator (CC 2015) and want it to work in Internet Explorer and Edge, use File > Export instead of the File > Save as > SVG. Also don’t copy/paste your SVG paths from AI directly into your code editor.

In Illustrator, you can create and use patterns on your artworks. The nice thing about a pattern is that you can then apply it on many different elements. 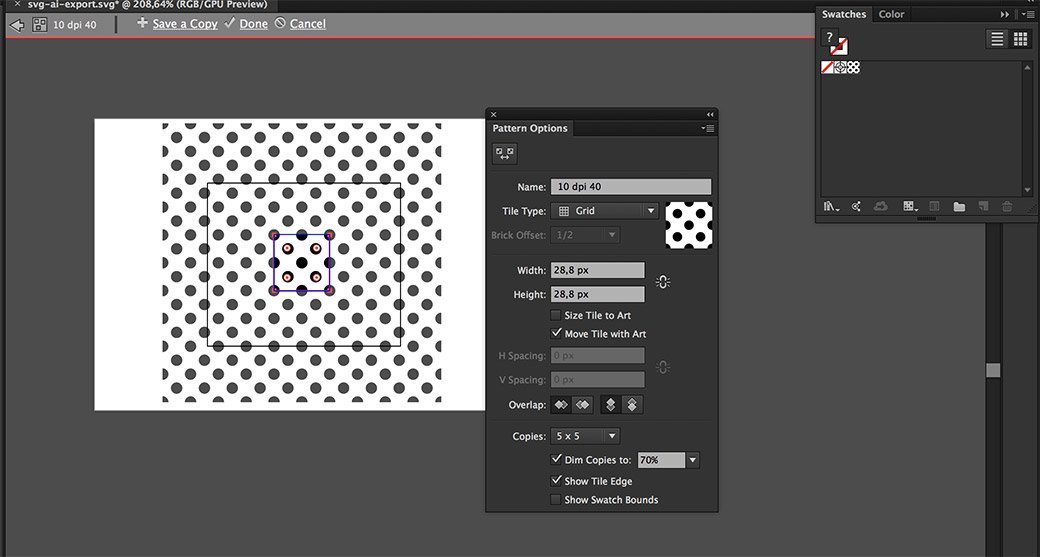 This pattern is then applied using a clipping mask on the top of the path you created. This pattern can be translated into SVG as well with the <pattern> element. To put it simple: you declare the pattern, and then you use it where you need into the fill attributs.

The final codepen with all 3 techniques

See the Pen PZKyBw by Stéphanie Walter (@stephaniewalter) on CodePen.

To export our path with the pattern, we first used the Illustrator option Save as > SVG. But we quickly noticed that the SVG  pattern exported with this method would not work in Internet Explorer / Edge. This seems to be a known bug reported on Adobe’s forums: it looks like IE and Edge don’t really like the negative values exported by Illustrator. Also note that if you copy/paste the path from AI directly to the code editor, it triggers the same script that Save as so it won’t work either.

My first attempt was to remove the negative values: it did not work.

2. Rework the pattern directly in code

The second solution worked pretty well, but it’s a lot of efforts and tweakings. Meanwhile, I was chatting with Sara who nicely pointed me towards the right people. As it turn out, Illustrator introduced some enhancement to the SVG export which are available under Export as > SVG. This pretty much solved the problem of my pattern export. You can see the code generated in the codepen, it’s a little bit long and might need some optimization but it works. Also, as Dirk Schulze mentioned in the conversation, the new export is not used for Save as (and copy/pasting of path to code editor) yet.

SVG really looks like a wild world sometimes. They are many different ways to do the same thing. Fortunately it looks like our tools are starting to go in the right direction. But we might still need to tweak the code generated to make sure it’s clean and optimized.

Are you looking for a UX or UI designer, for a site or mobile application? Do you want me to give a talk at your conference, or simply want to know more about me? You can take a look at my portfolio and contact me.

One thought on “Quick Tip: exporting a SVG with a pattern that works in IE/Edge from Illustrator CC 2015”

♥ Design by Stéphanie, header illustration by Laurence, code/motion by Geoffrey, SEO by Myriam ♥ — © 2020 — All Rights Reserved